For the month of May 2013, The Osceola/South Mississippi County Chamberof Commerce and  The Arts Council of Mississippi County invite the public to view a unique display of photographs taken and prepared by local photographers Joel Collier and Al Anderson.  The photographs are available for viewing during regular business hours at the Chamber offices, located at 116 N Maple in Osceola.  In April, Collier & Anderson were the featured gallery artists at the Ritz Civic Center, located in downtown Blytheville.

Joel Collier, a self-employed nation-wide home repair specialist, is originally from Redding, California.  He moved to Blytheville in 2005 when he purchased two homes in the area to repair and sell.  He became interested in photography when he watched a friend go through a roll of film of pictures and discarded prints that Collier thought he would have kept.  This inspired him to purchase a “point and shoot” digital camera.  He taught himself and asked advice from friends on how to take pictures.

For the month of February 2010, The Arts Council of Mississippi County featured Collier’s photography for their gallery show.  Of that experience, Collier decided he learned two things.  First, he felt he didn’t really know how to take pictures to his satisfaction, only that he knew how to“talk” to his camera.  Second, he felt that with his digital camera, he was limited to what size of picture he could take.  This pushed him with the desire to go from digital photography to film photography.

Joel Collier considers himself a “documentary” and “self-portrait” photographer.  He believes his pictures reflect part of himself and how he feels, combined with his life experiences to also include his perspective on the subject of his photo shoot.  Collier explains, “I believe I shoot ‘footprints’ of man.  For example, buildings, roads, cars and things that we leave behind when we are gone.”

He stated that his photographs in this show express a journey through his photographic skills and experiences.  His photographs show sights he saw in West Virginia, Texas, Arkansas and California. For these pictures he has used some film that people may think has “expired”.  For example, one picture on display which he took in November 2012 was taken with film that was made in 1947 and was dated to expire in 1948.  “I don’t do this all the time.  I have a theory on film.” Collier states, “If it has an expiration date prior to when I started high school, I start to wonder.  If it is after 1977, I believe it should work.”

In 2002, Kenosha, Wisconsin native Al Anderson was discharged from the United States Navy and moved to Blytheville, Arkansas, where he currently lives with his wife Lora and their two children, Chase and Vanessa.  Anderson states that his interest in photography actually started about 18 years ago when he started taking pictures of trains.  He did this for about three years.  In 2010, he got the bug again and started taking pictures with a digital camera.

He tells that through the eye of his camera lens he has learned a new creative outlet different from his normally routine technical work environment.  His new view has him experiencing life with a new perspective.  With the travels he made with his job as a Melt Shop Electrician with Nucor Steel Arkansas, Anderson displays pictures he has taken from different locations in Arkansas as well as pictures taken in Canada, Switzerland, and Finland.

Anderson stated of Collier, “I admire the patience and creativity that Joel has for the medium that he uses."


Posted by Osceola/South Mississippi County Chamber of Commerce at 8:54 AM No comments:

The annual Osceola/South Mississippi County Chamber of Commerce banquet for area Arkansas Scholars was held on Tuesday, April 30, 2013, at 6:30 pm at the Ohlendorf Civic Center.   The event honored this year's recipients with recognition and a certificate of achievement in the presence of their parents and guardians, superintendents, principals, and guidance counselors. 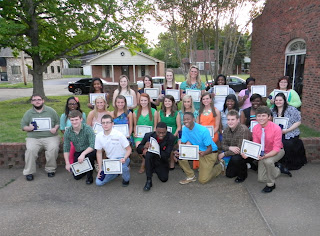 The Chamber is proud to announce the Arkansas Scholars for 2013 from Osceola and Rivercrest High Schools are:

High school students are asked to meet the following criteria in order to be recognized as Arkansas Scholars: 1). Earn semester grades of "C" or above in all courses; 2) Achieve a 95% or better attendance record (average over four years); 3) Complete the recommended courses to graduate from high school and to prepare for post secondary education; 4) Finish high school in eight consecutive semesters; 5) complete eight hours of community service; and 6) Have no major disciplinary actions on your transcript.

Both schools will designate the Arkansas Scholar recipients on their respective graduation programs. Employers in the state and colleges that request transcripts will also see a special decal, letting them know that the student met these higher requirements to be designated as an Arkansas Scholar. In addition to these distinctions, several higher education institutions in Arkansas have announced scholarships for Arkansas Scholars graduates.

This annual recognition event, sponsored by the Osceola/South Mississippi County Chamber of Commerce, was started as a two-year program during the 1996-1997 school year and the first banquet was held May 6, 1999. The program has now extended to a four-year program, following students from their freshman through senior years of high school. Event organizer and Chamber board member Shawn Chafin thanks everyone that works to keep this program going strong, as the students work very hard to meet the requirements for this distinction.